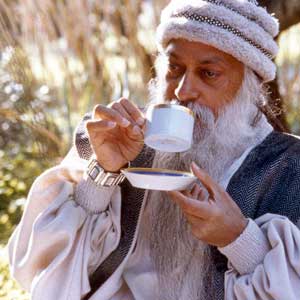 Today is the ‘death’ anniversary of Osho, popularly known as Bhagwan Shree Rajneesh too.

What is amazing about this man is his spiritual incorrectness that has lived on despite the death of his body.

Osho talked about a lot of concepts, thousands of books are written in his name and he continues to have a massive hold on spirituality and philosophy. Although it is debatable whether his Foundation is doing justice to his legacy, it certainly shows that the mass media have ignored the greatest saint out of India on his death anniversary.

In my opinion, Osho is enlightened. He brought a new dimension into spirituality that shocked the world. From sex to superconsciousness – I remember reading one of his books on the train in London and a guy in his 50s come up to me and say are you fond of the ‘sex guru’. The label that really annoyed me at the time but I could understand him, to the guy he was right, he would be a ‘sex guru’ because who else talks openly about sex and still be an enlightened master.

Osho turned sex into a household ornament. He saw nothing unusual about it and went against all the establishments because he knew the repression of sex is the root of all evils. It has affected our common sense and if it affects our common sense then it surely means we can never make a truly rational decision.

Osho was against Gandhi and Mother Teresa, who on the face seem like nice people to gain inspiration from but Osho saw the flaws. I mean who would think that Mother Teresa, who was against abortion, be turned into a monster? Nobody saw the common sense but Osho did. Mother Teresa would be against abortion because that is where her bread and butter came from. She wanted orphans. If she really loved them and cared for them, then she would have been for contraception. Acts may be noble but your thoughts are your reflection. Mother Teresa’s thoughts were definitely questionable. All you need to do is type in ‘Osho on Gandhi’ and you will see the amount of constructive criticism Osho had given the man, who looked on the front very simple.

However, Osho to me is someone that brought common sense into understanding the meaning of life. The meaning is…you search for it yourself. It is within you and this is commendable. It wasn’t like ‘I have the answers, you can’t go anywhere else!’ He was someone that allowed people to follow and then unfollow. It made no difference to him.

If anything that needs to be learned from Osho then it is to be your self. Get to know your self and be proud of whom you are. Be in love with yourself. Be aware of your self and ultimately you will live the ultimate life. I know for a fact, Osho has all the answers, it depends on whether you are ready for the answers.

Long live the memory of one of the greatest masters that the world has seen!

From the depths of a soul, creativity is born and is able to blossom into a tree scattered with sweet fruit. Creativity creates change. View more posts

One thought on “Post 49 – Osho: One of the Greatest Masters’ of All Time!”

This site uses Akismet to reduce spam. Learn how your comment data is processed.